A low-traffic mountaineering via ferrata connecting Rifugio Graffer and Rifugio Peller. A long, isolated crossing of the untamed beauty of Brenta.

A long (roughly 12 km), challenging via ferrata in the less known northern section of the Brenta group. A mountaineering hike that is only partially equipped, running beneath rocky spires and along narrow ledges and ridges.

The itinerary, which can be done in one day but can also be broken up into multiple days thanks to the shelter sites along the route, is isolated and runs through untamed landscapes with exposed and other challenging sections, not all of which are equipped with handholds. As a result, it calls for excellent physical fitness and good technical skill and suited only for experienced mountaineers.

It can be done in either direction, but south to north is preferred due to the better light exposure in this direction.

Do not underestimate the length and isolation of this itinerary. It includes sections that are exposed, unprotected and challenging. Outlets: trail no. 334 at Bocchetta dei Tre Sassi; trail no. 380 Salt di Val Gelada at Val Gelada Pass; trail nos. 329 and 310 at Prà Castron Pass.

From Rifugio Graffer (2,261m / 7,418 ft), follow trail O336 to the north, a section without particular challenges until Orti della Regina (Garden of the Queen), a spot so named because legend has it that a queen and her entourage came here and planted flowers and shallots. It is famous not only for this legend, but also for the fact that there are a number of boulders with some amazing fossils. From this natural terrace, head up the scree slope to a rock outcropping. Cross this outcropping along the ledge. Cross the meadow and continue on to the junction with via ferrata Vidi (no. O390).

Continue along trail no. O336, which takes you to the base of the east face of Pietra Grande and Cima Vagliana and on to Val Gelada. Climb up to Bocchetta dei Tre Sassi (2,614m / 8,576 ft), where a plaque marks the start of the Claudio Costanzi mountaineering via ferrata. Follow the trail to the north until the Val Gelada Pass (2,677m / 8,783 ft), where the next section of trail winds along Sasso Alto. Continue along the ledges equipped with cables and rungs to the east face of Cima Sassara, where a brief detour would take you to the summit and down to the Bivacco del Centenario Emilio e Settimo Bonvecchio shelter (2,790m / 9,154 ft), named after two climbers from Trentino. The Trentino region donated this site to SAT on November 12, 1972, in commemoration of the 100th anniversary of the alpine organization's founding. Reservations are possible, and there are 6 beds with bedding, but keep in mind that you will find no food or water here.

From the shelter, you can head down to a small col where the Cima Paradiso ridge begins. Head up to Cima Paradiso (2,815m / 9,236 ft) to enjoy the full 360° view. Continue along the ridge that takes you to Cima Rocca (2,831m / 9,288 ft) and then head down a chimney to Bocchetta delle Livezze (approx. 2,770m / 9,088 ft), where the via ferrata continues along the east face of Cima delle Livezze and then of Cima del Vento. From here, continue through the fields to Bocchetta del Vento, where there is a panorama that stretches out to Lake Tovel (famous because, until 1964, the lake would turn red at certain times of the year due to the algae that once grew there). Head up to Cima Tuenna (2,664m / 8,740 ft) and then continue along the ridge to Monte Benon (2,684m / 8,806 ft).

Head down to a highland that is covered in scree in certain spots and continue on to the Prà Castron Pass, where the challenging via ferrata ends and you will find a fork in the trail where you could head down to the Bivacco Costanzi shelter and then to Dimaro, or you can continue along trail no. O336 and down the east face of Sasso Rosso ("Red Rock", which gets its name from the color of the rock here and how it stands out from the rest of the Dolomites) to Selletta della Nana. From here, head down to Pian della Nana and continue on towards Malga Tassulla across the grassy meadows.

To get to Rifugio Graffer:

Book recommendation by the author

Book recommendations for this region:

Recommended maps for this region: 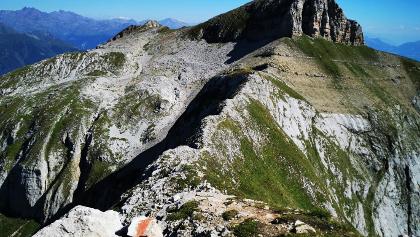 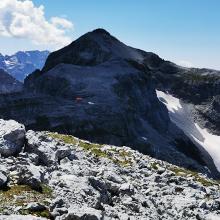 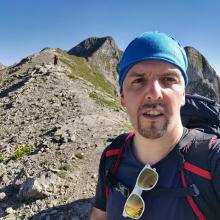