Stunning via ferrata along ledges beneath Cima Falkner and the Brenta peaks. Amazing panoramas with some exposed sections, but suited to those who are new to via ferratas.

The lovely Alfredo & Rodolfo Benini via ferrata runs along exposed ledges beneath Cima Falkner. This popular panoramic route is suited to those who are experiencing a via ferrata for the first time. The itinerary features one-of-a-kind vistas over several Dolomite peaks as you climb to an altitude of nearly 3,000m (9,850 ft).

Its ease of access by way of the Grostè gondola lift, low level of difficulty, and moderate elevation gain make it a very popular route that is recommended for beginners. However, it is not to be underestimated due to the exposure of certain sections and the high altitude. Estimate another 2-3 hours’ hike from the end of the via ferrata to Vallesinella.

The high altitude and general geography of the trail call for this via ferrata to be done only under stable weather conditions in order to avoid the risk of storms, low visibility, and ice, which the trail is particularly subject to.

Outlets: via ferrata Bruno Dallagiacoma. For this itinerary, adverse weather conditions can be a source of difficulty and danger, making this via ferrata a route that is not to be underestimated.

From the upper station of the Grostè gondola lift, follow the directions to trail no. O305 and the upper station of the Grostè Express chair lift. After a bit of false flat, you will reach a fork for trail no. O301, which goes to Rifugio Graffer, and shortly after you will pass a fork for Cima Grostè, where the standard climbing route to Cima Grostè begins (UIAA grade I-II, YDS 5.2-5.3).

Continuing along trail no. O305, you will reach the north base of Cima Grostè (approx. 2,600m / 8,500 ft), where you will find the first cables of the via ferrata. Head slightly uphill along the natural rock ledge to the east face of Cima Grostè. From here, the panorama includes, to the north, Val di Flavona and Val di Non and, to the east, Cima Roma and Paganella.

Climb a little ways up to the col of Campanile dei Camosci (2,771m / 9,091 ft). This pass (a "col", or bocchetta in Italian) is a bit like a window onto the Adamello-Presanella group. Following the cable and other aids along the base of Campanile dei Camosci and Cima Falkner, you will reach a metal plaque indicating that you have reached the highest point along this itinerary (at 2,900m / 9,514 ft).

Head down for about 150 meters (490 ft) following the cables to reach the base of Campanile di Vallesinella. Continuing on, you will shift over to the west face of this mountain group. Pay particular attention here as there is often snow as late as July. Head slightly downhill to a fork in the trail, where via ferrata no. O315, dedicated to Bruno Dallagiacoma, heads down to the right and goes directly to Rifugio Tuckett & Sella (2,272m / 7,454 ft). If you continue to the left, you will go around Cima Sella and head down the last section of via ferrata to Bocca di Tuckett (2,647m / 8,684 ft). Continue down to the Brenta Inferiore hanging glacier and then on to trail no. O303 until you get to Rifugio Tuckett & Sella (2,272m / 7,454 ft), which you will be able to see from the col.

Shuttle bus service (in summer, from late June to early September) from Madonna di Campiglio (Piazza Brenta Alta) to Vallesinella. Check schedule and prices online or ask for the booklet from the tourist office at Via Pradalago 4.

You may also check the bus schedule of Trentino Trasporti www.ttesercizio.it.

To get to Madonna di Campiglio:

- A4 Milan-Venice motorway, take the Brescia Est exit at km 130. Average travel time from exit (by car): 2 hours and 30 minutes.

Between Madonna di Campiglio and Campo Carlo Magno, there is the Grostè gondola lift, which will take you up to the start of this itinerary.

For the return trip, follow the directions to Rifugio Tuckett, Casinei, Vallesinella, which can be reached on foot from the end of the via ferrata in about 3 hours.

Ample paid parking is also available at the base of the Grostè gondola lift.

Book recommendation by the author

Recommended maps for this region:

Basic Equipment for Via Ferratas

Technical Equipment for Via Ferratas 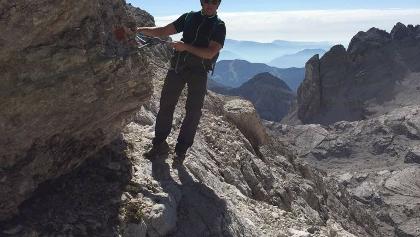