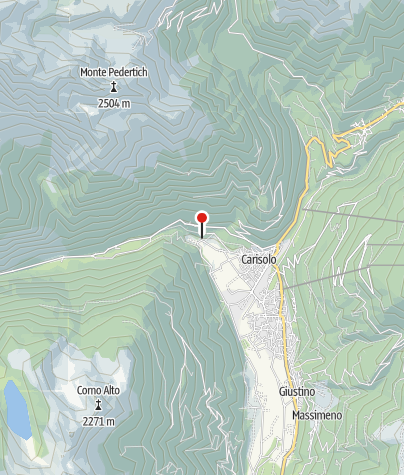 Santo Stefano Church is perched on a granitic rock overlooking the gateway to Val di Genova, in the Adamello Brenta Nature Reserve. The external Southern wall is completely frescoed with paintings by Simone Baschenis who, with his Dance of Death, depicts Death while warning the living and the seven cardinal sins. The position of the main characters mirrors the hierarchy of Medieval society, according to which noblemen precede the low-class men, as well as the clear distinction between priests and non-clerical people. On the Northern wall indoor, Baschenis painted the great fresco of Charlemagne in 1534, giving the small church a high artistic value.
As the legend goes, before arriving in Pinzolo, Charlemagne saw a small isolated church on the top of a cliff. He went there and left behind a document narrating his achievements. For sure, the first evidence proving the existence of Santo Stefano Church dates back to 1244, and the Baschenis started decorating it in 1461. However, the place names of Sot Castel, Mas del Castel, Fontana del Castel point to the fact that the hill had hosted a prehistoric castellar, used probably during the Early Middle Ages.

Routes to this place

Nearby Points of Interest