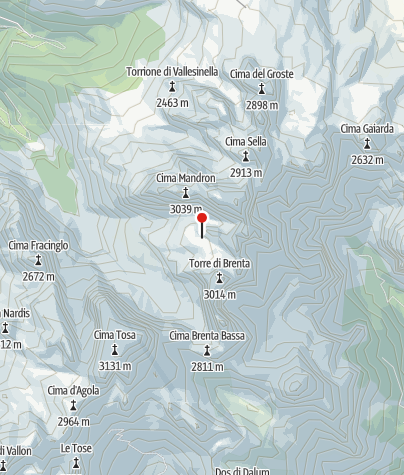 In the mid-sixties, when Ezio Alimonta and his father Gilio, both mountain guides, came down from the Brenta and arrived at the foot of the Vedretta degli Sfulmini glacier, they looked at each other and said: a refuge is needed here, so mountaineers can have a roof over their heads as close to the mountains as possible. They chose the right place, in one of the Brenta’s most majestic settings, and a few years later - in 1968 - the refuge was inaugurated, and it is still, after a series of enlargements, run by the family of mountaineers whose name it bears. This refuge is a base for the Via delle Bocchette via ferrata, and is so close to the rocks that it’s easy to dream of being an mountaineer. Open From 17 June to 25 September Before leaving for your hike, always contact the manager to verify the actual opening of the mountain hut Walks Take the Bocchette Alte via ferrata as far as Bocca del Tuckett to get to the Rifugio F. F. Tuckett e Q. Sella (6 hrs 20 min - EEA-MD). The Bocchette Centrali instead takes you to Bocca di Brenta, close to the Tosa and Tommaso Pedrotti refuges (4 hrs 10 min - EEA-D). Contact: +39 0465 440366 (from 20/06 to 20/09) +39 333 6323919

LOCATION
cannot be reached by car

Number of beds in dorm
54

Conca degli Sfulmini, where Rifugio Alimonta is located, is the Dolomiti di Brenta’s most beautiful amphitheatre and one of the most scenic spots ...

Booking
at the travel destination

Conca degli Sfulmini, where Rifugio Alimonta is located, is the Dolomiti di Brenta’s most beautiful amphitheatre and one of the most scenic spots ...